This easy sauteed kale is the quickest and easiest way to prepare kale. It comes out tender with tons of garlic flavor and without any bitterness. Plus it only takes 10 minutes.

Sauteing kale is perhaps the fastest way to cook kale that still results in flavorful, tender, and delicious kale. This specific kale recipe is made with crispy garlic, red pepper flakes, and a touch of vinegar for one truly incredible kale recipe.

Kale has been one of my top-five veggies for about the past 5 years running now. Once you get past its somewhat bitter flavor profile, you'll find it just has a great texture, mouthfeel, and taste that is complemented by a variety of flavors. It cooks up fast and it doesn't get all slimy like spinach sometimes can. It goes great with other leafy greens as well or is great on its own.

Any way you slice it (and I recommend a rough chop!) Sauteed Kale really knocks it out of the park for me, and I have a feeling this recipe will do the same for you too. Even if you're reluctant to try kale or have been in the past, I call this recipe, with all of the garlic and red pepper flakes a "gateway" recipe into incorporating kale into your diet for good.

How do you make Sauteed Kale?

Then, when the garlic begins to ever-so-slightly brown and becomes fragrant, add the kale. Stir to coat the kale in the oil, garlic, and red pepper flakes.

Now, add the vegetable broth and cover the pan with a lid. Let the kale cook for an additional 4-6 minutes or until the kale is bright green and tender.

Finally, take off the lid and add the red wine vinegar, salt, and pepper. Cook just another 1-2 minutes, or until most of the liquid has evaporated. Season as needed and enjoy!

Kale is a nutrient-dense superfood superstar! What makes it so healthy? Let's dig in!

How many varieties of kale are there?

It may sound like there are lots of kinds of kale but there really are only three: curly kale, red kale, and black kale. Then, inside of those three types are a few other varieties.

So first, curly kale has bright green leaves that are really curly, probably the kale that you are used to seeing in the store and is often used as a garnish.

Next is red kale that has crinkled leaves like black kale but has red or purple stems. It's sometimes called Red Russian kale as well.

Finally, there's black kale, which is crinkled more than curly and has long, flat, green-blue leaves. This is also called Tuscan or Lacinato kale, and the kind I prefer to use in this dish.

What are the side effects of eating kale?

There is such a thing as too much of a good thing. Like anything in life, you need variety. So, while as much as I love kale, I can't eat it every day, all the time, because…it also has some unwelcome side effects.

Kale is a great source of fiber, but too much of it can cause some bloating, constipation, stomach pain, or other stomach and digestive issues.

Can I add bacon to sauteed kale?

One of the most popular ways to cooked hearty greens is with bacon.  To cook your kale with bacon, start by cooking a few pieces of center-cut bacon. Cook them in a hot pan until crispy. Remove the bacon and set aside.

Then cook the greens in the bacon grease left behind in the pan, following the same directions below. Essentially you are just swapping out the olive oil and cooking in the bacon fat instead.

Finish the dish with the crumbled crispy bacon pieces.

There are lots of ways to customize this recipe and make it your own. Consider

Heat the olive oil, garlic, and red pepper flakes over medium-high heat. Once the garlic begins to lightly brown and becomes fragrant, add the kale. Stir to coat the kale in oil.

Add the vegetable broth and cover the pan. Let cook for 4-6 minutes or until kale is bright green and tender.

Open the cover and add the red wine vinegar, salt, and pepper. Cook 1-2 minutes until most of the liquid has evaporated. Season as needed.

About the authorMeet Kristen McCaffrey
Hi, I’m the cookbook author, recipe developer, and food enthusiast behind Slender Kitchen. I am obsessed with making healthy food that is easy to prepare and absolutely delicious. Meal planning is my secret weapon and I hope I can make meal time easier for you with our tried and tested recipes and foolproof meal plans. Learn More 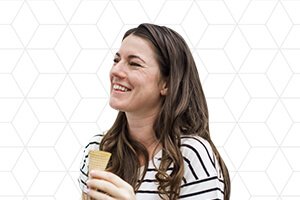 Did you make this?

Snap a picture and show us what you made on Instagram or Facebook. Tag us using @SlenderKitchen or #slenderkitchen.